Written by Mary Brainerd
Next The modern orchestral brass French horn was an invention based on early hunting horns. Horns were first used as musical instruments during 16th century operas. During the 17th century, modifications to the bell end (larger and flared bells) of the horn were made and the cor de chasse, or French horn as the English called it was born.The first horns were monotone instruments. In 1753, a German musician called Hampel invented the means of applying movable slides (crooks) of various length that changed the key of the horn.
In the 19th century, valves instead of crooks were used, giving birth to the modern French Horn and eventually the double French Horn

The Common Single Horn and The Double Horn 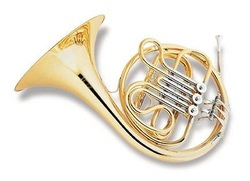 This is a single F Horn.  We can tell because of the three valves (keys) and the three "buttons" (valve caps).  Notice there is only one layer of tubing that corresponds to these valves. 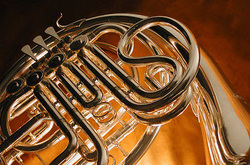 This is a Double French Horn.  It has four valves, (the fourth valve/valve cap is right along the left side of the image.)  But that's not enough to distinguish it as a double.  A single French horn in B flat will also have four valves just like this. We know it's a double because it has a double layer of tubing extending from the valves.  If you look closely, you will see the second, smaller layer of tubing lying beneath the top layer. The reason a double French Horn is called a double French Horn is because it is actually two horns in one - a Single F Horn and a Single B flat horn combined into one instrument, hence, a double horn.