Whether performing an elegant solo or being the heart of the orchestra, the violin is a "star" in the music world.

The origins of the Violin
The birth of the violin

The eastern ancestors of the violin

Instruments like the violin that use a bow to produce a sound are called bowed stringed instruments. The Arabian rabab and the rebec, which came from the orient in the middle ages and was played widely in Spain and France in the fifteenth century, are said to be the ancestors of the violin. Near the end of the middle ages, a bowed stringed instrument called a fiddle appeared in Europe.
In the East, the Chinese erhu and morin khur evolved from the rabab, and so they are relatives of the violin

Who made the first violin?

The two earliest violin makers in recorded history are both from northern Italy: Andre Amati from Cremona and Gasparo di Bertolotti from Salon (Gasparo di Salon). With these two violin makers, the history of the violin emerges from the fog of legend to hard fact. Violins produced by these two still exist today. In fact, the oldest violin in existence today is one built by Andre Amati around 1565. 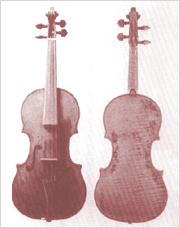 Bows in the age of environmental awareness

The preferred material for the stick of the violin bow has been pernambuco wood, which only grows in the Amazon delta region in South America. Originally, it was exported to Germany for use in creating dyes, but because of its unusual hardness, it began to be used to make bows. However, in recent years, this natural resource has began to become depleted. Tree farms were also created, but it takes 30 years for this tree to attain full growth.
The carbon bow shown in the figure below uses carbon instead of wood. Developed to protect the global environment while ensuring that the seeds of music continue to germinate, carbon bows have has good gripping characteristics and are long lasting.