What a life of a young musician!  We see hundreds of young children everyday at the store.  They need a new 'E' string because they tried to tune the instrument and tightened it too much.  They need their first "real" shoulder rest because they've grown out of the foam sponge.

Here are some pictures of Golden Music's world of strings: Here is a story about another string player, Paolo Spagnoletti.  Paolo was born in Cremona, Italy, the violin capital of the world.  Golden Music's owners travel there often to hunt down the best instruments for you.

CREMONA -The Italian City of Violins: Well, young Paolo did have an advantage to be born in this beautiful, musical city in 1768, but here in Denver, we also have many advantages:  string programs are in most of our schools, our rent-to-own program gets you into a fine instrument for a price any family can afford, the teachers are excellent, the rent-to-own program keeps the instrument playing well and you can move up to a better instrument for only a few dollars more monthly.

At the age of 12, in 1780, Paolo was introduced to the Naples Conservatory as a gifted student - it was said, he astonished his audition by glancing at the music and then played the piece through without the music.  He moved to London in about 1802, in his mid 30s to work in the King's Theatre orchestra.  He became the leader of this orchestra and worked with Paganini when he gave concerts there. Spagnoletti was described as having a modest disposition, and so ardently devoted to his music.  He was acknowledged as a pre-eminent orchestral leader.

Here is the only known picture of him, an engraving in 1836, he is in the middle. One of Paolo's last appearances was on March 28, 1834 when he led the first performance of Cherubini's Requiem in England.  Here's a link to a performance of the requiem. His favorite violin was a Guarneri, described here. *Piecing together the history of a violin is not an easy task. A master instrument that can be traced back to its birthplace in Cremona is unusual: even rarer if it’s a ‘del Gesù’.

The nickname of the ‘Spagnoletti’ Guarneri gives a clue to its colourful history. Lo Spagnoletto – the little Spaniard – was a popular Italian round dance and the nickname of Francesco Diana, leader of the Cremona Opera Orchestra. He was born in Cremona in 1720, the son of a barber who lived near the Guarneri workshop. Mozart wrote to his sister, Nannerl, in 1770: ‘In Cremona [the orchestra] is good. The first violin is called Spagnoletto.’

Francesco’s son Paolo also became a first-rate player. He moved to England, where he joined King George III’s orchestra. Paganini insisted on having ‘Spagnoletti’ as leader of all his 1832 concerts. Paolo died two years later and the first written record of his violin appeared. The Betts Notebook, which records many of the great instruments that passed through the London firm of Betts in 1820–35, lists a red violin with the comment: ‘Genl. Kyd made a preasant [sic] to Spagnoletti.’ General Kyd was a wealthy amateur musician who collected instruments on his trips to Italy.

The violin’s present owner speculates that it originally belonged to Paolo’s father, Francesco, and Kyd recovered it from Cremona as a gift for his famous son. It remained Paolo’s favourite instrument, even though he also owned a 1682 grand-pattern Nicolò Amati. From Spagnoletti the violin passed to Howard Elphinstone, then via George Hart to another dilettante, Emanuel Mohr, before it again reached one of the better players of the time, John Payne. In 1940, J.& A. Beare passed it to A.J. de Reyghere. By 1954 it was in the US, where it went through the Moennig and Wurlitzer shops. It is now safely in the hands of an Illinois musician, Elliott Golub. 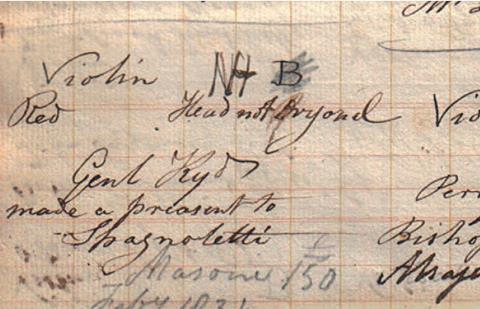 The violin was made in 1734 and is a typical example of a mid-period ‘del Gesù’, with a fine one-piece back of broad, flamed maple. Like others of this date, it is slightly shy in overall measurements, owing to a very narrow edge overhang. The workmanship is steadier than in later examples, and the trim outline and broadly cut f-holes give it a very attractive appearance. ‘Head not original,’ John Betts noted in 1834. In fact it probably is original, made by Giuseppe ‘filius Andrea’, who provided the heads for most of his son’s violins in this period. The varnish has not stood up well to orchestral life and has had its fair share of retouching, but the violin retains a glorious orange–red colour, which was the first thing Betts remarked on 170 years ago.

*the following is quoted from the Strad  https://www.thestrad.com/lutherie/from-the-archive-the-1734-spagnoletti-guarneri-del-gesu-violin/7609.article